From minor back pain and recreational injuries to major orthopedic surgeries, we are dedicated to helping you return to your favorite activities in a safe and healthy manner. Losing freedom of movement due to any orthopedic injury, illness, or surgery can be challenging and frustrating. We will be at your side to help you find your strength and return to your life.

Orthopedic Rehabilitation involves all areas of the musculoskeletal system including bones, muscles, tendons, ligaments, joints, and other connective tissues. At Spaulding, our therapists and clinicians use a variety of specialties and interventions to address these conditions. Different specialties include Physical and Occupational therapy, sports injury rehabilitation, manual therapy, post fracture care, custom splinting and bone health.  Our programs bring together the foremost rehabilitative therapists and clinicians to offer you, and your family superior rehabilitative care.

We go beyond addressing pain. Our therapeutic approach to musculoskeletal (orthopedic) rehab works to facilitate your return to an active lifestyle, including competitive athletics, work, leisure activities, hobbies, or pain-free living. Our goal is to empower you to overcome physical limitations while minimizing your time spent in rehabilitation when possible. By prioritizing your functional movement patterns we can get you back to what you enjoy faster with less setbacks.

Our Outpatient Therapists will design a treatment program centered around your goals, and a comprehensive assessment of your movement patterns and functional limitations. Our clinicians will use standardized objective measures to track your improvements, routinely assessing and modifying your care plan so that you receive the most appropriate treatment to achieve your goals. Our therapists will keep your referring care provider up to date on your progress, allowing for better-informed decisions regarding the continuum of care. 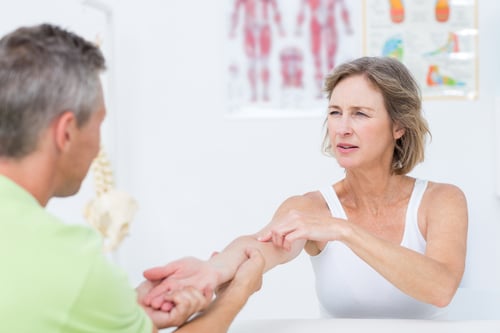 In the US, the CDC acknowledges 300,000 new cases of Lyme disease annually and Lyme

disease is endemic in New England. Lyme disease can manifest in a seemingly endless number of ways. While the spectrum of symptoms is similar for most sufferers, the worst of the bunch varies from person to person. And for those who have a predominance of neurological symptoms, the disease can feel especially debilitating and difficult to overcome.

Early symptoms can include impairments to joints, the heart, and the nervous system. Some patients suffer ongoing symptoms despite early antibiotic treatment, and continue suffering from chronic symptoms of encephalopathy, joint pain, and fatigue, among others.

That’s in large part because neurological Lyme — also referred to as Lyme neuroborreliosis (LNB) — is often confused with other serious neurological conditions such as multiple sclerosis and Parkinson’s Disease, which can be scary and overwhelming.

The most common initial symptom is neurogenic (nerve) pain that starts in the back and radiates down the legs. With that comes weakness, numbness, and tingling in the lower extremities. Other common symptoms include muscle aches, fatigue, headaches, and joint pain.

There are several potential treatments for Lyme disease through Physical Therapy. They are usually focused on the secondary symptoms and work in concert with the medical management of the condition.

A physical therapy program may include:

Send Us A Message

Ways to Give
Careers
Volunteer

In The News
Media Relations

Get the latest updates in health and wellness